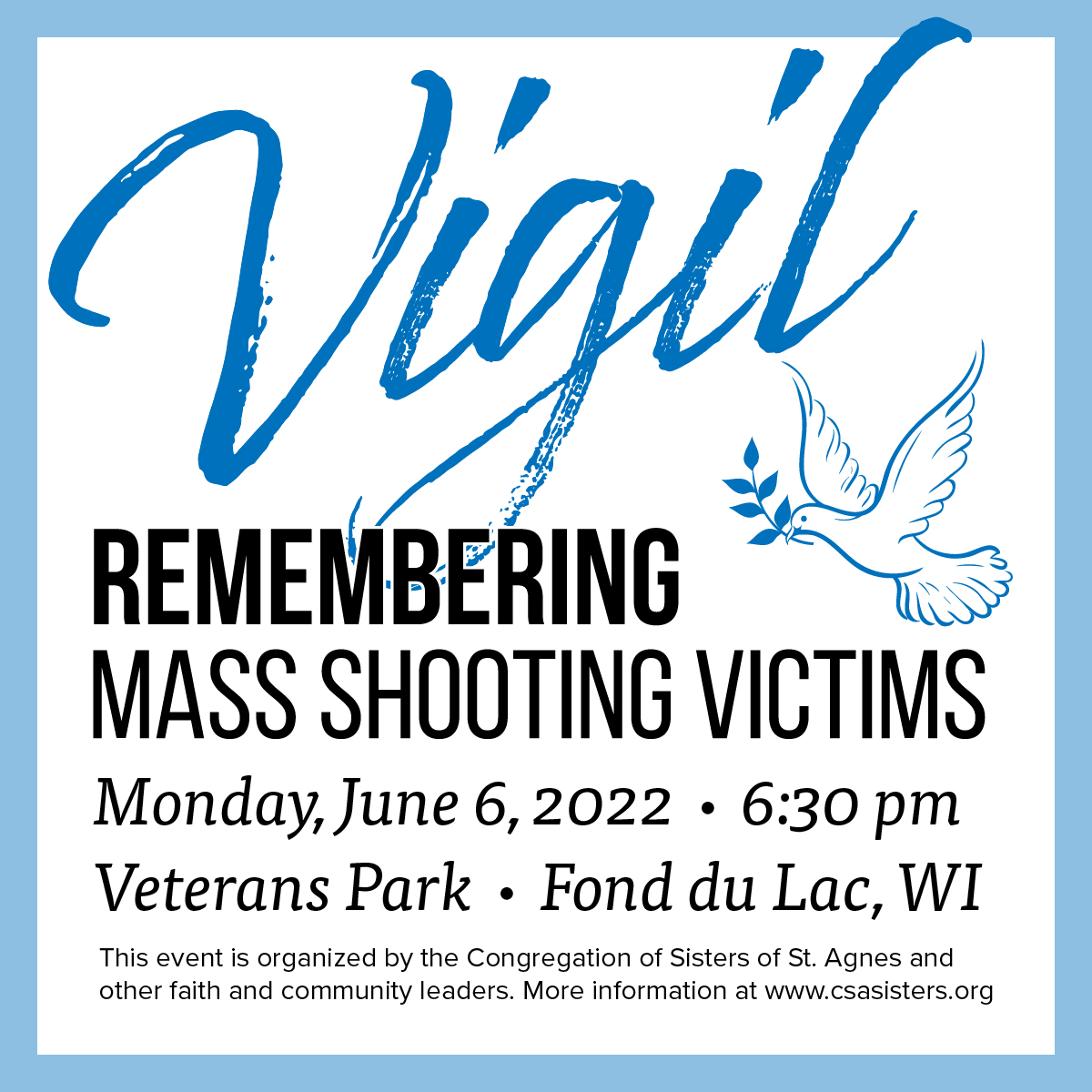 At 6:30 p.m. on June 6, 2022, the public is invited to join an ecumenical prayer vigil remembering the victims of mass shootings. The gathering will be held at Veterans Park (190 S. Main St.) in Fond du Lac and will include representatives from the Congregation of Sisters of St. Agnes, Pilgrim United Church of Christ, Ebony Vision, Latinos Unidos, United for Diversity, Bread of Life Church, Holy Family Catholic Church, the Fond du Lac Police Department, and local students.

The Congregation of Sisters of St. Agnes joins with over 23,000 Catholic women religious, associates, and partners in mission in over 30 states in calling for an end to gun violence.

On Tuesday, May 24, the world witnessed another horrific, senseless tragedy as a lone gunman shot and killed 21 people, including 19 students, at Robb Elementary School, Uvalde, Texas, just two days before the end of the school year.

Only ten days prior, on Saturday, May 14, we had seen another gunman, motivated by racism, shoot and kill 10 people at a neighborhood grocery store in Buffalo, New York.

We are once again heartbroken. Whether in Uvalde, Buffalo, Parkland, Newtown, or Littleton, all of us, God’s people, deserve to live in communities free of gun violence. The massacres like these are abhorrent and should never be accepted as “normal.” These acts of violence can no longer be tolerated.

They have to stop. It has to end.

Both shooters in Uvalde and Buffalo legally obtained their weapons. The United States, when compared to peer countries, has far more guns per capita, incidences of gun violence, and some of the least restrictive gun laws.

We challenge ourselves, our Church, and all people of goodwill to rededicate themselves to end the scourge of gun violence in this country. To pray for the conversion of society. We plead that all continue to contribute to this movement by taking some of the actions listed below.

About the Congregation of Sisters of St. Agnes

The Congregation of Sisters of St. Agnes (CSA), founded in 1858 in Barton, has been based in Fond du Lac, Wisconsin, within the Archdiocese of Milwaukee for the past 151 years. Today, CSA has more than 150 sisters across the United States and Nicaragua who strive to minister with simplicity and hospitality in the fields of education, healthcare, pastoral ministry, and social service. CSA Associates are women and men who choose to have an intentional relationship with the Congregation of Sisters of St. Agnes.