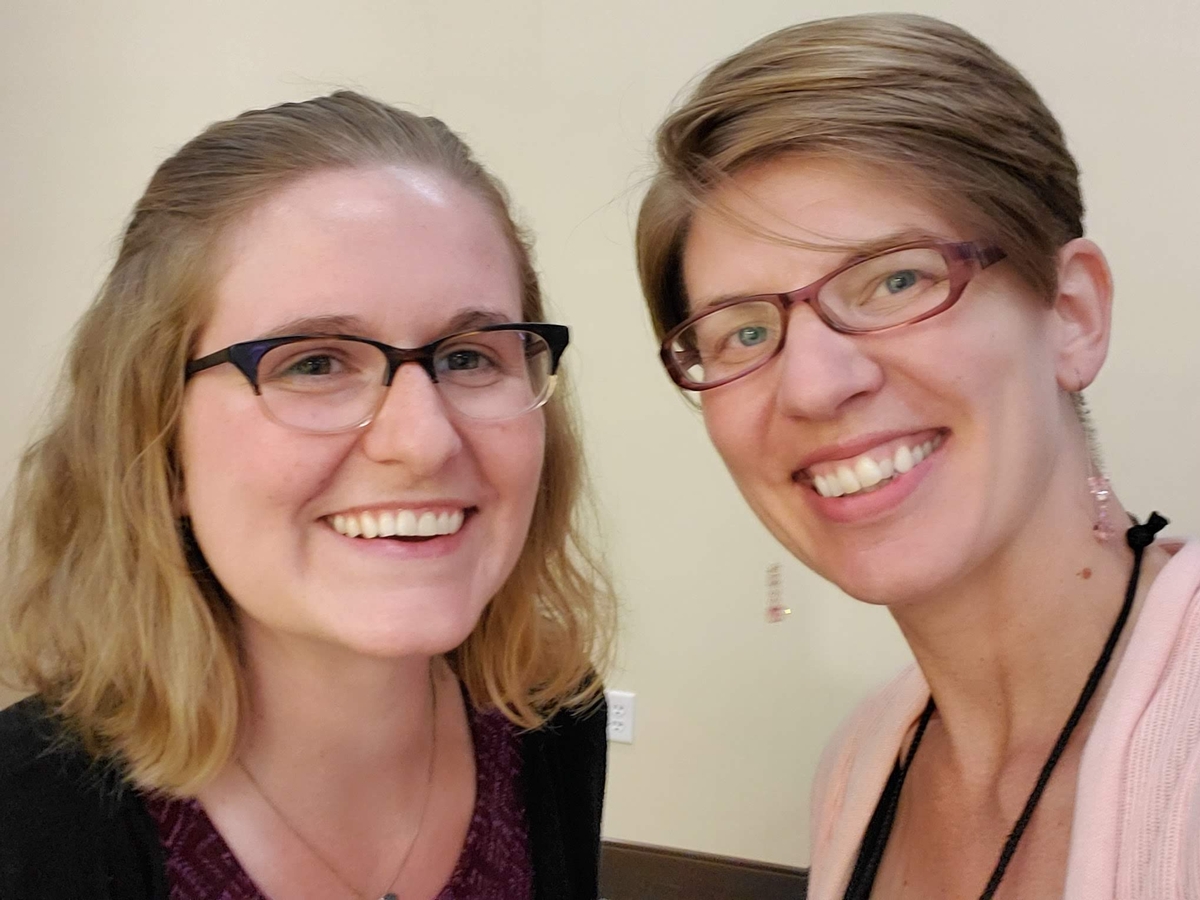 This blog post is part of a series reflecting the experience of Dusty Krikau as she visits the sisters in Bisbee and Tuscon and attends the conference for Communicators for Women Religious. While Dusty is an employee of the congregation, the views expressed here are her own personal reflections on the time spent near the border, with the sisters, and learning from other congregations at the conference; they are not necessarily endorsed by the Congregation of Sisters of St. Agnes.

This morning’s keynote speaker was Ms. Katie Gordon. Katie is part of the organizing team for Nuns & Nones, assisted with the “How We Gather” project, and has done research into the “Archetype of the Foundress.” She is not Catholic, but is inspired to live a spiritual life. When asked recently where she saw herself in five years, she replied, “Wherever the spirit takes me.” As part of her work with Nuns and Nones she has learned to be open to consistently seeking and living in a world of “not knowing.”

Nuns and Nones is a national movement that began about two years ago. It brings together groups of Sisters (not actually “Nuns”) and Seekers (people who would check the “None” box when asked about their religion). The gatherings begin with a simple prompt: “State your name and one wondering you hold.” This simple prompt has started the co-mingled groups down paths of deep concern, paths of strong love, and a myriad of other paths in between. In each community where gathering occur the groups come together with mild trepidation and end up leaving with strong bonds of friendship. Sister Janet Rozzano was part of one of the initial gatherings simply because the group happened to be using her kitchen. Her skepticism and her resulting positive outlook were framed in haiku she wrote at the end of the day:

Eek. What will I say?
I’m too old for millennials.
Surprise, we’re soul mates!

As someone who came into the Congregation of Sisters of St. Agnes last year, with no Catholic background, I completely concur with Sister Janet’s assessment. When speaking with the sisters about their lives and ministries, I often think about the fact that being a sister sounds like the life many of my friends and I dreamed of living: "intentional communities that are spiritually grounded and actively socially-engaged." Sisters have been doing this type of work for centuries without ceasing and without burning out; surely there is a lesson in the way they live from day-to-day that makes that possible. (I personally think Sister Joan nailed that lesson in her list of four imperatives, which are in yesterday’s blog post.) Occasionally, I’ll go down to the lunchroom in the motherhouse to enjoy lunch with the sisters on a workday and inevitably I leave with my small spiritual flame rekindled. When I began in my role last December, one of the first things on my list of tasks was to investigate starting a Nuns & Nones group in Fond du Lac. I have done the investigating and now look forward to implementation in March!

We will be welcoming Katie Gordon to speak at our Women’s Leadership Breakfast on March 5, 2020 and follow up the breakfast with our first ever gathering of Nuns & Nones for a small group of ten seekers and ten sisters. As someone who has taken the time to seek out this blog, you are getting a jump on signing up! If you want to reserve as space in that first group or would like to be part of planning it, please send me an email. Even if you don’t plan to join Nuns & Nones, please save the date to join us for breakfast that morning to hear about how women in leadership can inspire all of us to be better leaders.

Nuns & Nones meetings have no set schedule. The groups reconnect as often as every two weeks or sporadically throughout the year as availability allows; it simply depends on what each group decides works best for them. The organizing team has even put together a handbook!