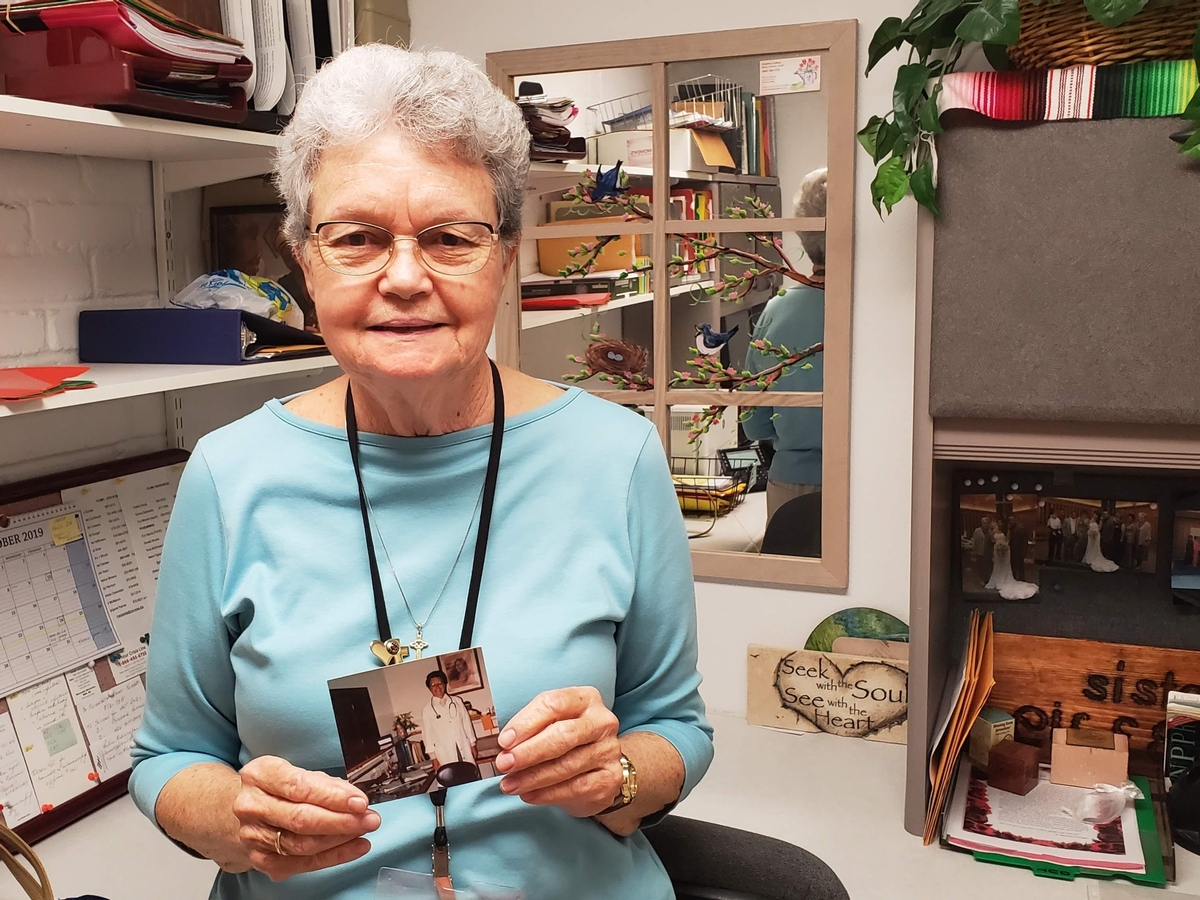 This blog post is part of a series reflecting the experience of Dusty Krikau as she visits the sisters in Bisbee and Tuscon and attends the conference for Communicators for Women Religious. While Dusty is an employee of the congregation, the views expressed here are her own personal reflections on the time spent near the border, with the sisters, and learning from other congregations at the conference; they are not necessarily endorsed by the Congregation of Sisters of St. Agnes.

My day began with one brief cup of coffee and conversation with Sister Mary Rose discussing all of the many things she wants to show me on my next visit and then I was on the road to Tucson. I assumed that an early morning trip would be unremarkable and yet I must remark on two things: (1) watching a coyote dash across the road in front of me and (2) stopping for a border patrol checkpoint. The idea of a checkpoint is not foreign, but despite traveling internationally across many borders, I have never been stopped at a checkpoint that was not literally on the border. It was an uneventful experience, just a quick stop, a dog sniffing, and a short “have a nice day,” and yet it has stuck with me. What would have been the catalyst that would have inspired them to request my passport or to ask me to step out of the car? I am unlikely to find out, but those questions linger.

Upon arriving in Tucson, I was greeted with a smile and hug from Sister Eileen Mahony. Because my visit would be short, I met her on site at St. Elizabeth Health Center, where she has served as a nurse practitioner since the mid-80s. (The photo above shows her in her current office, holding a photo of one of her first days on the job in 1985.) As she led me on a tour, she regularly paused to say hello to staff and patients in English and Spanish and was excited to introduce me to many of her favorite people who are doing work to provide health services and advocacy for those in the community who are uninsured or underinsured. In a sea of names over the course of the day, the only ones that I can currently recall are Sister Michelle Humke, a sister of St. Joseph who is the only other remaining woman religious on staff, and Dr. Jessica Morena, an obstetrician who was quick to point out the hard work being done by her interns and residents from the University of Arizona. All the administrators and medical staff were bustling, but greeted Sister Eileen with a smile and were happy to take a few moments to hear about the visitor in their midst. I was shocked to see just how much could be fit into such a small building footprint, but it became clear that the close proximity of all the services was intentional. Sister Eileen explained, “We have an integrative medical program and we always help patients find a warm handshake.” She went on to clarify that this meant that any time a patient received a referral to another service in the center, they weren’t just given a phone number to call or a business card to take home; they were walked to the office where they would be going and introduced to the new service provider with a “warm handshake,” whether it be for counseling services, dentistry, or any other medical need. The attention given to ensuring that patients felt warmly welcomed was a breath of fresh air.

Upon completing our tour of the health center, Sister Eileen and I took a trip to Casa Alitas. When I got into the car, I thought I knew what to expect, since I had been reading all about Casa Alitas in Sister Eileen’s blog posts (which are part of this blog). I was wrong. As we drove into the space, I could understand why the optics of the situation were troubling; Casa Alitas is in the back corner of a fairly massive juvenile detention building. But as we drove around the corner of the building, I remarked on how my first impressions of the building were that it was well kept and set apart from any concerns about neighboring households or commercial districts. If I didn’t know what it was driving in, I would be easily reassured that the place I was going wasn’t in a run down back lot. We parked the car in one of many covered spaces in the lot and I couldn’t help but smile seeing that so much of the lot was covered and each covering was made using a roof of solar panels. Not a common site in Wisconsin, but a regular feature of the parking lots throughout Tuscon!

We walked about a quarter mile to the entrance, where we dropped off a small donation of blankets from the sisters in Fond du Lac and then Sister Eileen gave me a tour of the building. I was drawn to the small touches: raised beds with bright color planks used on all the sides, “stained glass” stickers used on windows to add to the privacy of the families, little ziptop bags of ibuprofen with neatly written dosage instructions in Spanish for those who might need it on their bus journeys, and a volunteer happily being the “fetcher” every time a young boy tossed a ball in the play area for her to retrieve. Sister Eileen came alive as we walked through the building. She engaged the guests in Spanish, inquiring about how soon they would depart, whether their journeys were long, how old was their “precioso” little baby, and then wishing them well and “via con dios.” (Go with God.)

As part of the tour, I was introduced to the Casa Alitas Program Manager, Diego. His mind was clearly engaged in an administrative task and when asked gave me a quick peak into what he was thinking about. He explained that they were in the middle of determining the best course of action for families when it came to vaccines. “Every child has a right to vaccinations and with flu season coming up, we’re already planning to provide flu shots, but we’re also considering becoming a VFC site.” The administrative tasks associated with being a “Vaccines for Children” provider are daunting and would require large amounts of data entry volunteers, but it would mean that Casa Alitas could vaccinate children when they arrived so when the go to their final destination they would be eligible to enroll in school, regardless of which state they were in. “They could theoretically go and get the vaccines at not costs when they arrive with their sponsoring family, but depending on which judge they get for their asylum case, it could be seen as ‘applying for public assistance,’ and it would void their asylum application,” Diego explained. I could only imagine how the frustrations of little things like this must add up for Casa Alitas day in and day out.

Sister Eileen and I finished our tour and enjoyed lunch together before I headed off the road again to Phoenix.

My time visiting with CSA sisters in Arizona has come to an end, but the population of the “Communicators for Women Religious” conference is about 20% sisters from congregations across the globe. (The remaining 80% are lay people like me, who work for the communities.) So far, in just a few hours, I have interacted with sisters from Hungary, Italy, Ireland, Canada, and all across the US. The conversations of the welcome reception covered a wide range of topics, from the 2017 “Cycling with Sisters” program to spirituality retreats to conferences on the border, and I cannot wait to hear the messages throughout the day tomorrow!