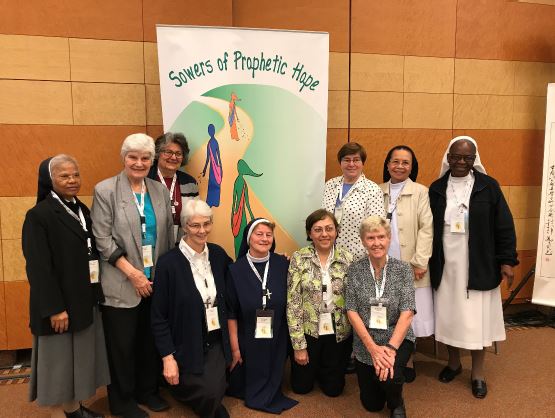 From May 6-10, 2019, the International Union of Superiors General (UISG) met in Rome.  ‘Sowers of Prophetic Hope’ was the theme of the 21st Plenary Assembly which urged us to consider how women religious can be signs of hope in a world of division and war and for the many suffering women and children in our world. Approximately 850 superiors general from 80 countries participated.  There were 13 official languages and several others available for simultaneous translation.  Tables were arranged according to language groups.

Sister Jean Steffes, General Superior of the Congregation of Sisters of St. Agnes, travelled with Sister Mary Diez, SSSF, and stayed  near the hotel where the meetings were held.  Reflections included the future vision of religious life, the integrity of creation, a biblical perspective on the responsibility of religious life, living interculturally, and the call to interreligious dialogue. A closed session for members only dealt with the safeguarding and protection of minors and vulnerable people.

On the final day, after a liturgy with Cardinal João Braz de Avíz in St. Peter’s Basilica, they had time with Pope Francis in the Pope Paul VI hall.  Handing his printed remarks to the president of UISG for later distribution, the Pope opened the floor to questions from anyone present.  Topics that surfaced included:  the results of the commission on the diaconate for women; the importance of life-witness of consecrated women; need for presence at the peripheries; ecumenism; and inculturation.