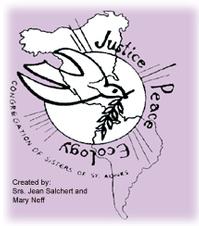 The Congregation of Sisters of St. Agnes (CSA),  like Catholic Women Religious throughout history, has responded to the needs of the times ever since their founding in 1858. Pursuing justice, working for peace and respecting Earth was just the way things were done.

In 1989, during her term as General Superior for the congregation, Sister Mary Christine Fellerhoff kept the sisters informed about peace and justice issues. Between 1989 and 1993, Jan Parker, then Coordinator of Associates, assisted Sister Mary Christine in formalizing the ministry of justice and peace. Sister Nieves de la Rosa became the full time coordinator in 1998 and continued until her untimely death on November 7, 2000.

Since then, the JPIC ministry has been fulfilled by Justice Coordinators: